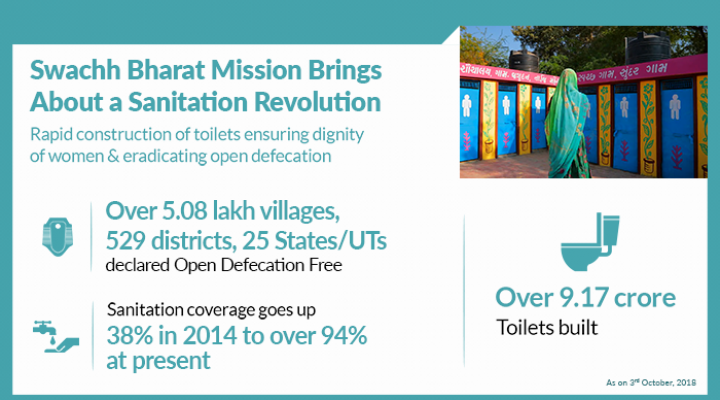 The Swachh Bharat Mission –Grameen (SBM) one of the impressive brainchild of the government led by PM Narendra Modi which kick-started the 150th year celebrations of Bapu has heralded an unprecedented revolution. The Mission which envisaged construction of toilets as one of it’s crucial components, has become both a massive behaviour change program and a Jan Andolan on the ground.

An atypical instance associated with the project is that the Prime Minister Modi broke the conventional mode by declaring the inception of the mission during the 2014 Independence day speech. While the erstwhile speeches usually focussed upon the government’s lofty goals and exhortations, the emphasis on outlining the goal of Swachh Bharat to stop the practise of ending open defecation is rather unique.

The SBM has shown tremendous progress since the inception through an evidence-based assessment . Few statistics in this regard includes: Another prevalent change of the mission includes the rapid behavioural change that occurred in the society. This was reflected in the mentality of Indian Households who were known to be averse to having toilets inside their homes. From attributing cultural notion with having a toilet inside their homes that almost translated to a ‘taboo’, people preferred the option of practising open defecation. This is characterised by the glaringly low percentage of household who had access to toilets even after 70 years of Independence in 2014.

However , it was the government led by PM Modi’s resolve to eradicate the menace. From equipping 8.7 crore rural households to changing the mindset of 125 crore Indians whose pre-dominant view about cleanliness is to push the dirt out of the house into public space, the mission has come a long way.

A notable instance is that the National Rural Sanitation Survey (NARSS) conducted under the World Bank support project found that 93.4% of the household in rural India who have access to toilet use it. This reflects that behaviour change is happening on the ground . The behaviour change represented in the statistics say a lot about the success of the mission. Where having a conversation of toilet and defecation was confined to closet talk , the government bringing this issue out inducted both economic and societal transformation of which women plays an integral role.

The mission has not only upheld the dignity of women, but also roped in them as partners of the project from the grassroots level where they were given roles to emphasise upon the role of toilets in both homes and the larger community. This was brought forward by PM Modi during the launch of ‘Swachhata Hi Seva’ campaign where he lauded the contribution of India’s Nari ‘s Shakti in the mission. Thus, the mission with an aim to secure human lives and demographic dividend is a revolution playing out in real time. As an instrument of mass mobilisation, as a people’s movement and a national goal towards total commitment, Swachh Bharat truly captures the essence of our Independence Day movement. Carrying forward the ideals and principles of Gandhi India is thus on the accelerated roadmap to eliminate open defecation in entirety by October 2, 2019 which is also Bapu’s 150th birth anniversary.

This blog has been contributed by a volunteer.